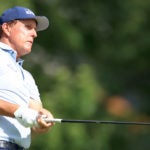 Phil Mickelson hit his tee shot on the par-3 4th hole at Muirfield Village Golf Club into the right greenside bunker. He knocked it out to within 3 feet of the hole. Good job.

Before hitting the putt on Sunday during the fourth round of the Memorial, Mickelson placed a black Yeti coffee cup with the words “Coffee for Wellness” about 3 feet behind the ball. It would line up right between his left foot when he putted. It would very likely be shown on the PGA Tour Live broadcast.

Mickelson has been promoting the benefits of his coffee blend for just about a year. In June, he filed for a trademark for “Coffee for Wellness,” with the intent to use it for coffee, coffee beans and coffee pods, and there’s a website that says each is coming soon. On Sunday, he promoted the brand. As he hit his putt, PGA Tour Live cameras broadcast cup, feet, ball and hole. A little TV time. Maybe intentional. Maybe not.

Only Mickelson knows for sure. After making his putt, he picked up his ball from the hole, picked up his Yeti cup and smiled to a few claps in the background.

Last July, Mickelson said he needed a “hard reset,” so he fasted for six days, consuming only water and a special coffee blend he crafted with the help of performance coach Dave Phillips. Ever since then, he’s been touting the coffee, which contains Ethiopian coffee beans, MCT or XCT oil, flavorless collagen protein powder, Himalayan pink sea salt, almond milk, L-Theanine, Manuka honey and cinnamon.

“I think coffee is one of the most powerful antioxidant foods that we eat,” Mickelson told the New York Post at last year’s Open Championship. “So I’ve been working on this special blend to help heal, help with mental clarity, putting a lot of cool ingredients in.”