More than 4 million people in the U.S. have now been infected with the coronavirus, according to a New York Times database. The numbers are rising like the oceans. Covid-19 is the global warming of pandemics. Trump doesn’t believe in that either.

The broad general numbers are pretty alarming, but the CDC says the number could actually be much higher–anywhere from 2 to 13 times higher–based on your region or locale.

Thank god, we’ve graduated from “sleeping giant” to merely “little-noticed.” But the bell is still tolling.

Citing data from the consulate in Los Angeles, 48 Filipinos have had Covid-19 and 19 have died. That’s a small sample, but still a mortality rate of 40 percent, higher than the 3.7 percent cited by Johns Hopkins.

The reporter for the LA Times story called me during her research, and I told her tallying Covid Filipinos is made even more difficult when you consider the Spanish surname curse. When is a Garcia not a Latinx Garcia, but rather a Filipinx Garcia?

That the California Department of Public Health does not break down Asian American subgroups, and we really are in a guessing game.

But there are things we do know what makes Filipinos prone to Covid. Our high fat, meat-based diets, our sedentary behaviors make us susceptible.

Throw in the fact that nearly a fifth of registered nurses in California are Filipino, and one would expect higher than normal Covid cases and deaths in our community.

Still, we could have avoided a lot of pain, if only we had a leader. Trump called it all a “hoax” at the beginning. His failure to lead–and to prioritize the economy over public health –has made the country sick, and getting sicker.

The president wears a mask occasionally now. It should be to hide his shame. But Trump is basically shameless.

You want an example of leadership? John Lewis comes to mind.

I would see Lewis when I worked as a press secretary in the 103rd Congress. He was still young and feisty, just in his 50s, and had the fire to turn an ordinary one-minute speech on the House floor into a bit of passionate rhetorical magnificence. It could be on anything, but more likely it was something extraordinary, like a stirring defense of people of color, or anyone in need of Lewis’ caring yet forceful voice. 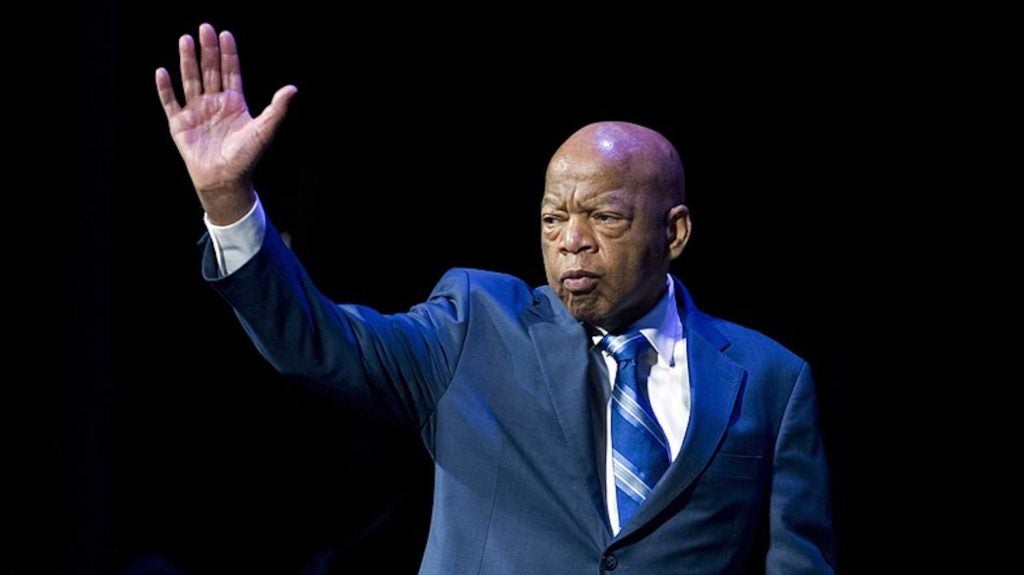 There was always a special comfort knowing that John Lewis was there for all of us. And now all Filipino Americans who understand our place in the fight for racial justice mourn his passing.

I’ll miss him as our human barometer for all that is right in society. But the truth is Lewis will never be far from our hearts and minds. For those of us who continue to fight against all the ills, all the time, Lewis was immortalized on a Sunday in March 1965.

That day Lewis became our conscience and our partner, when he made his courageous choice in Selma, Alabama to lead 600 people in a voting rights march to Montgomery across the Edmund Pettus Bridge.

As they came off the bridge, Lewis faced state troopers in a moment captured by an iconic photograph. It shows a young Lewis in a tan raincoat, his knees to the ground as a helmeted officer wielding a nightstick is about to tee-off.

“I was the first person to be hit, and I still have a spot on my forehead,” he told CBS News.

The attack on Lewis is one of the lasting images of “Bloody Sunday.”

“I really believe to this day I saw death,” Lewis explained to correspondent Rita Braver. “We had to do it, we had to do it. I think there’s some force, sometimes I call it the spirit of history that maybe just maybe tracked us down, and said this is your time. And you must do it; if you don’t, who will?”

It is the call that must be answered. Lewis answered the call. Do you hear your call? Will you answer?

It may just be the call to march, like many of us felt after George Floyd’s death. The knee to Floyd’s neck is as loud a call as the nightstick to Lewis’ head.

I heard a call to march in 2013, seven years ago in late August.

Lewis was in Washington, DC leading the 50th anniversary of the historic March on Washington, a key civil rights march that culminated in MLK’s “I Have a Dream” speech.

At the commemorative march, I got to the front and snapped this picture with Lewis at the helm. As they went by, I was overwhelmed by all the people who answered the call.

But there was nothing nostalgic about this march. It was the reaffirmation after half a century of the fight for justice on all fronts in our country–for health care, immigration rights, gay and transgender rights, environmental rights, labor rights, voting rights.

And then a few days later, on the actual anniversary day of Dr. King’s “Dream” speech, there was Lewis to remind us how we were all still in this together.

“We may have come here on different ships, but we are all in the same boat now,” Lewis said. “So it doesn’t matter if we’re black or white, Latinos, Asian Americans, or Native American, gay or straight, we are one people, we are one family, we all live in the same house. Not just an American house but the world house.”

It’s hard to imagine that in seven short years, the United States is more divided than ever, with our rights in all the different areas we marched for through the years under attack and more precarious and endangered like never before.

The call we must answer now is loud and clear. It’s spread throughout society and sometimes obscured by the obscene shadow cast by the pandemic’s wrath.

The president may not be acting swiftly to address the problem at hand of Covid-19 caseloads and death rates, testing and tracing.

But he’s doing all he can to undo health care, a woman’s right to choose, and immigration rights. As people march to reform our police methods, the administration is moving toward unseemly authoritarianism as secret police actions take place in Portland, Oregon; he now threatens to use similar tactics in other cities across the nation.

And then there’s the administration’s war to deny voting rights, disenfranchise felons, reapply poll taxes, and discredit vote-by-mail. The scar on Lewis’ head was for voting rights. At the very least, Congress should move to restore all the parts recently gutted from the Voting Rights Act.

At a 2017 speech honoring Dr. King, Lewis gave us all our forever prescriptions for social justice.

“When you see something that is not right, not fair, not just, you have a moral obligation to do something, to say something, and not be quiet.”

In his passing, we are reminded to heed Lewis’ simple, practical admonishments, now more than ever.

Emil Guillermo is a journalist and commentator. He writes a column for the Inquirer.net’s North American bureau. Twitter @emilamok. Listen to his podcasts on amok.com

Don’t miss out on the latest news and information.