The State reported that the University of South Carolina is facing increased calls to rename a major building on campus that’s named after the late Strom Thurmond, “a prominent S.C. lawmaker and ardent segregationist.” According to The State, Moe Brown, “a former USC football player and current Congressional candidate, led a press conference Friday in front of the Strom Thurmond Wellness and Fitness Center to call on officials to change the building’s name.” 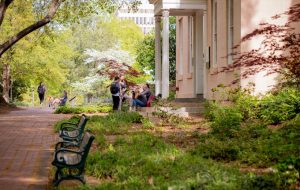 The State noted that others in attendance at the press conference included the University of South Carolina’s student government president and vice president, along with head women’s basketball coach Dawn Staley.

According to The State, when asked for replacement names, “Brown said he had a few ideas but did not want to undercut USC President Robert Caslen, who is held a public meeting Friday to solicit input on new campus names for buildings.”

Thurmond formerly served as governor of South Carolina and “was a U.S. senator from 1954 until 2003. He was a third-party candidate for president in 1948, representing the States’ Rights Democratic Party, or Dixiecrats, whose campaign slogan was ‘Segregation Forever.’ He died in 2003.”

Following the press conference, Caslen issued a statement saying he is  committed to creating a more inclusive environment and noted the appointment of the school’s first Black provost, Dr. William Tate.